God reveals that the coming of Antichrist will be preceded by the deliberate action and planning of 10 rulers that will gain all political power in the world just before Antichrist arises. In fact, the entire world will be reorganized into 10 Super Nations. The creation of NAFTA had nothing to do with economics; rather, NAFTA is Nation #1 of this 10-nation reorganization plan, of which the Bible prophesies in Daniel and in Revelation.

Listen now to God's prophecy concerning the secret plans which these 10 rulers devise to seize control of the world and then hand this control over to Antichrist [the Beast]. Notice that these 10 rulers are secretly working with Antichrist even before he becomes public:

"The 10 horns that you observed are 10 rulers... who are to receive power and authority for a single hour, along with the beast. These have one common policy (purpose), and they deliver their power to the beast... God has put it into their hearts to carry out His own purpose by acting in harmony in surrendering their royal power and authority to the beast until the prophetic words of God shall be fulfilled." [Revelation 17:12-13, 17]

A careful reading of this passage makes it very clear that the 10 rulers devise a plan prior to the appearance of Antichrist, and that they plan to turn their political power over to Antichrist as soon as he arises. This scenario is very consistent with Daniel's revelations about the 10 toes and 10 rulers in chapters 2 and 7, respectively.

Therefore, when we see the U.S. President leading the global charge to a United Nations' government, we know that this is Satan's plan, not God's. We can also know that its final implementation is the result of a conspiracy, supernaturally directed by Satan for well over 100 years. And, just as the Bible foretold, this conspiracy will result in the appearance of Antichrist.

The UN Divides the World into 10 'Regional Groupings'

Agenda 21 - This global contract binds governments around the world to the UN plan for changing the ways we live, eat, learn and communicate – all under the noble banner of saving the Earth. Its regulations would severely limit water, electricity and transportation – even deny human access to our most treasured wilderness areas. If implemented, it would manage and monitor all lands and people. No one would be free from the watchful eye of the new global tracking and information system. - Berit Kjos, "Local Agenda 21 - The U.N. Plan for Your Community"

Sustainable Development - The concept of Sustainable Development basically says that there are too many people on planet Earth and that the population of the world must be reduced in order to have enough resources for future generations. [Under the New World Order plan,] the UN should be the global custodian of the Earth and all of its resources. This means that we will be measured by how much we produce and how much we consume as found in the "family dependency ratio." Every person will be valued according to their usefulness. In addition, the UN will control the Earth's resources – energy, water, food and so on. The concept of Sustainable Development can be found in the Communisto Manifesto and the 1977 USSR Constitution. - Joan M. Veon, The Women's International Media Group, Inc. 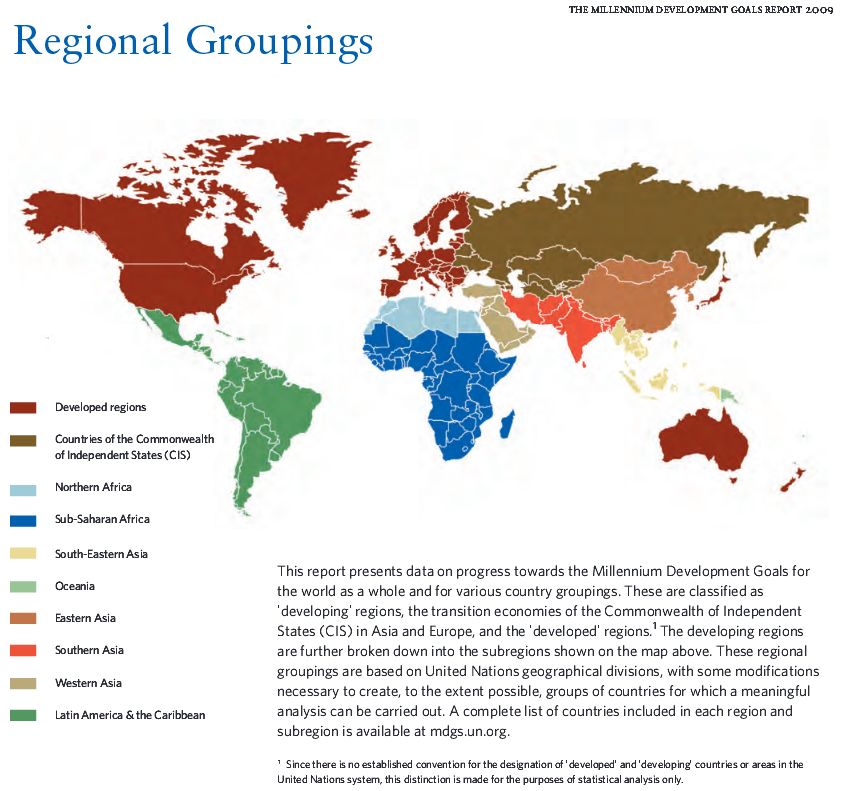 The UN Divides the World into 10 'Regional Groupings'

The Millennium Development Goals (MDGs) – as the targets are known – are among the seven “strategic opportunities” to be realized not over decades but within the next twelve months, Mr. Ban told the 192-member General Assembly.


“Taken together, they can make the world safer, fairer and more prosperous today and in the future,” he stated. “I ask that we join together to make 2010 a year of sustainable development – to meet the MDGs, address climate change, promote global health, and take the necessary steps for lasting and robust economic recovery.”

Mr. Ban highlighted the special MDG summit he will be convening in September in conjunction with the Assembly’s annual General Debate. Prior to that, in March, he will present his own assessment to the membership on the gaps and needs on this issue.

Negotiating a binding agreement on climate change, as well as to deliver on commitments made to date, was the second priority emphasized by the Secretary-General. Last month, countries ‘sealed the deal’ on a political accord which seeks to jump-start immediate action on climate change and guide negotiations on long-term action.

It also includes an agreement to working towards curbing global temperature rise to below 2 degrees Celsius, efforts to reduce or limit emissions, and pledges to mobilize $100 billion a year for developing countries to combat climate change. Mr. Ban said he intends to launch a high-level panel on climate change and sustainable development, which will deliver its own recommendations on the way ahead.

The Secretary-General also called for empowering women as never before during 2010, and pointed to the need to work towards setting up the new gender entity to be established within the UN, and step up efforts to prevent violence against women. The appointment of a Special Representative on the prevention of sexual violence in armed conflict will be announced soon, he added.

Noting encouraging progress in the field of disarmament, Mr. Ban’s fourth priority is working towards a nuclear-free world. “As with the MDG summit, we must prepare the ground for success,” he stated, listing a series of meetings that he will be attending on the issue in Geneva, Paris and Washington.


“The fifth strategic opportunity lies in preventing and resolving deadly conflicts around the world,” the Secretary-General went on to say, adding that 2010 will undoubtedly bring unforeseen political and humanitarian crises.

Among the challenges anticipated are critical elections in Iraq, Sudan, Cote d’Ivoire and Myanmar. In addition, the situations in Afghanistan, Pakistan, Yemen, the Democratic Republic of the Congo (DRC) and Guinea, among others, will continue to demand attention.


“In the Middle East, we must generate new momentum in the search for a comprehensive, just and lasting peace,” Mr. Ban stated. “One year after the Gaza conflict, a fundamentally different approach is required to address the major humanitarian and reconstruction challenges still facing its people.”

The sixth priority, said the Secretary-General, is to advance on issues “at the heart of who we are – human rights and the rule of law.” In this regard, he urged the Assembly in the coming weeks to conduct a thorough and clear-eyed review of the Human Rights Council.

He also called for strengthening the International Criminal Court (ICC), describing it as the “centrepiece of our system of international criminal justice,” and urged all nations to become parties to the Court’s Statute.

Last, but not least, Mr. Ban cited the need to strengthen the UN system.


“In the last years, we have made important progress in realigning the United Nations with new global realities. But more has to be done.

“As an Organization, we have to commit to continuously improve the way we are doing business. Changing with changing times and evolving needs has to become a way of life at the United States,” he said, noting the need to rejuvenate management, develop the emerging leaders of the future, and build a flexible workforce for the 21st century, as well as make better use of modern technologies.

“I sense renewed energy as we start the new year and take on the heavy agenda ahead,” Mr. Ban stressed to reporters following his informal briefing to the Assembly.

Habitat II - The UN Plan for Human Settlements
Bicycles instead of cars? Dense apartment clusters instead of single homes? Community rituals instead of churches? "Human rights" instead of religious freedom? The United Nations Conference on Human Settlements (Habitat II), which met June 3-14 in Istanbul, painted an alarming picture of the 21st century community. The American ways – free speech, individualism, travel, and Christianity – are out. A new set of economic, environmental, and social guidelines are in. Citizenship, democracy, and education have been redefined. Handpicked civil leaders will implement UN "laws," bypassing state and national representatives to work directly with the UN. And politically correct "tolerance" – meaning "the rejection of dogmatism and absolutism" as well as "appreciation" for the world's religions and lifestyles – is "not only a moral duty, it is also a political and legal requirement." - Berit Kjos, Kjos Ministries, June 1996

The Habitat Agenda Goals and Principles (Exerpt from the Preamble to this UN Document)
We recognize the imperative need to improve the quality of human settlements, which profoundly affects the daily lives and well-being of our peoples. There is a sense of great opportunity and hope that a new world can be built, in which economic development, social development and environmental protection, as interdependent and mutually reinforcing components of sustainable development, can be realized through solidarity and cooperation within and between countries and through effective partnerships at all levels. International cooperation and universal solidarity, guided by the purposes and principles of the Charter of the United Nations, and in a spirit of partnership, are crucial to improving the quality of life of the peoples of the world. The purpose of the second United Nations Conference on Human Settlements (Habitat II) is to address two themes of equal global importance: "Adequate shelter for all" and "sustainable human-settlements development in an urbanizing world." Human beings are at the centre of concerns for sustainable development, including adequate shelter for all and sustainable human settlements, and they are entitled to a healthy and productive life in harmony with nature.
Posted by magiclougie at Saturday, November 26, 2011